There’s this little meme edit I’ve been meaning to make for a while. Mostly as a dig at myself and the kinds of analyses and interpretations I know it can be too easy to default to. 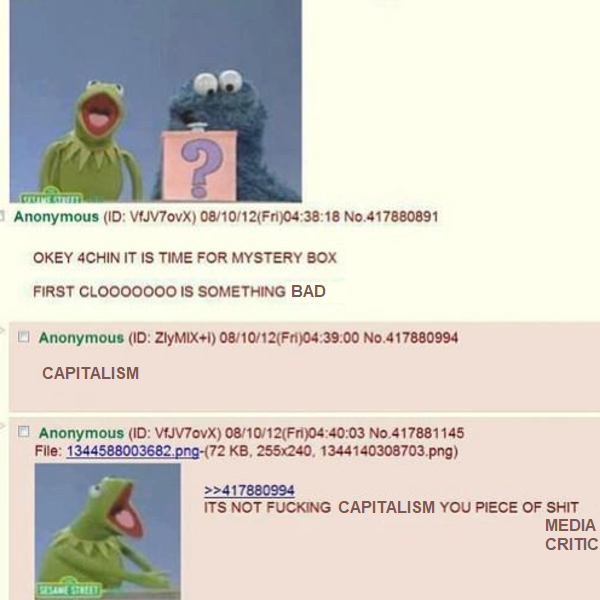 I mean it’s definitely fair to presume that artists laboring under the exhausting death throes of such a system may be inclined to comment on said system. But like the depths of an unexplored dangerous labyrinth, there are layers to interfacing with that idea. On that note, there’s the subject of Made in Abyss, specifically its recently under-way second season which sees its adorable moppets of protagonists stumble into a bizarre-even-by-the-standards-of-this-series community of ‘Hollows’. And I admit it’s easy to look at this portrayal of an economic ecosystem where everything including peoples’ lives and bodies is determined to have some kind of market value, itself based entirely on vibes, which will charge you a literal arm and leg for besmirching that system and determine, yeah, might be a little bit of a broad commentary on capitalist systems going on there. But I also feel like jumping straight to that categorization might not be getting the full picture, as I see this story, so far, as tying more granularly into a subject Made in Abyss has analyzed through its whole run: Transactional relationships.

END_OF_DOCUMENT_TOKEN_TO_BE_REPLACED

I liked Stranger Things 4. It honestly had some of what I think were the strongest parts of the series, especially in terms of idea exploration. After seeming to realize around the end of the previous third season that they might be seeing diminishing returns at treating the centralized kids of the cast as kids in the story, the Duffer brothers and their crew have, in this fourth outing, wisely decided to focus on the awkward teenage transition to adulthood, and the sometimes seemingly-sudden changes that can result in. It’s heartening for a series very pointedly stuck in the nostalgic, 80’s-tinted past, to spend a ton of its lengthy latest season interrogating the fears and questions we have about changing, arriving at the point that such personal shifts are not only possible, but necessary and good. I was among the many who previously (with admittedly little basis) thought this might be the final season of the show, before being proven wrong with a fifth season left to go. But that emphasis on depicting changes, making this feel like a transitory chapter for the cast and plot, actually works in its favor, and the shocked status quo and character evolutions we’ve left on leave me all the more excited to see where that fifth finale will forge forth to.

But that doesn’t mean getting there was a particularly even road, and for all the great bits Stranger Things 4 has along the way, there are a bunch of elements that make me worry they might still be beholden to their older compulsions. I’m one of those whiners who was complaining about episode length before the show even started, but then just by the first episode I realized why the extended runtimes were necessary: The cast of Stranger Things has absolutely ballooned by this point, and circumstances from the previous season have left all these characters spread out across the actual world instead of contained to the simple set of Hawkins. So just covering all of them within that space presents an issue of practicality solved by simply having more show. The problem then arises when the actual plot participation by everyone is so blatantly lopsided that it sabotages not just the overall structure, but several of the concepts the narrative is otherwise working with.

END_OF_DOCUMENT_TOKEN_TO_BE_REPLACED

Unlike Made in Abyss, a series with enough sincere interior elements and broad emotional appeal that some people will take issue if you refer to it as ‘problematic’ on account of all the problematic shit in it, I don’t think anyone would disagree with me referring to the original Panty & Stocking as a problematic fave. It’s a series that wears its offensive elements on its sleeve, half the overall joke being its Cartoon-Network-stylings containing characters who swear and fuck a lot. And part and parcel to that offensive agenda is, well, offending people. As time has moved on and critics in the progressive sphere have looked back on Panty & Stocking, there’s that understanding of how of its time it was, contemporaneous with the kind of comedy that was powering cartoons over here in Family Guy and South Park, the so-called ‘equal opportunity offender’ which still somehow always seemed to prioritize offending all those who were already regular targets by the non-equal-opportunity rude comedies; Those who, you know, were the groups who could actually be harmed by such offenses.

END_OF_DOCUMENT_TOKEN_TO_BE_REPLACED

Back around the time Love Live! Superstar!! was getting ready to premiere, I remarked that it felt like every successive anime entry in the now-unavoidable multimedia music empire felt like the best one yet. That wasn’t exactly a hard hill to start hoofing it up, of course, given that I thought the first season of Love Live! School Idol Project itself was mostly just okay, and it wasn’t until the stronger character work and comedy stylings of the second season that I wound up genuinely hooked on the franchise. So it makes sense that the even more tightly-constructed Love Live! Sunshine!!, able to play around with series establishments and take another turn at tonal aspects from that first one, would wind up as comparatively stronger. And so by then, firmly entrenched in the series as I now found myself, it made sense that the self-congratulatory franchise party of Love Live! Nijigasaki High School Idol Club‘s first season would be something I was totally down for: A trip through Love-Live-World that didn’t even need to go to the Love Live, its knowing playing with character archetypes and structural shake-ups powering it just as well as those further subversions (and gorgeous presentation) would propel its own successor in Love Live! Superstar!!.

END_OF_DOCUMENT_TOKEN_TO_BE_REPLACED

For all the negative things I could say about RWBY as a story and a series, I could never bring myself to disparage Monty Oum, God rest his soul, or his ambition. I mean, the man effectively achieved the dream we’d all had since we were kids: He got to make his own anime, and the result is as close to a pure expression of the kinds of aesthetic excess we all thought was the coolest part of the medium in our formative exposure to the stuff. That’s the point that one of my mutuals brought up, of course: Oum’s vision of the kinds of message-board signature-style overtness was a 2000’s-era relic itself by the time RWBY debuted in 2013. The time of the appeal of the anime angel girl look and the sorts of stories you imagined Evanescence music videos to in your head was long passed, and that’s definitely part of why so many of us scoffed at RWBY when it first came out. It was exactly the sort of thing we would have loved when we were twelve, and there’s nothing a twentysomething hates more than that.

END_OF_DOCUMENT_TOKEN_TO_BE_REPLACED

ANN’s Manga Preview Guide took up a far amount of my May, and has just wrapped posting all the write-ups, including the ones I did there. However, there was one additional review copy I was sent, the new ‘Naoko Takeuchi Collection’ release of the original Sailor Moon manga, which I, in my infinite capacity for giving myself extra work, wrote up a review of right before being informed by my editor that we weren’t going to do anything with that one. On account of, you know, this being the fourth release of that manga. But I don’t need to let things go to waste, so here as a bonus in my own space is that review. Enjoy!

END_OF_DOCUMENT_TOKEN_TO_BE_REPLACED

On November 22nd, 2007, an original short anime episode went live on Japanese streaming video service Nico Nico Douga. Ten minutes in length, it was titled ‘Candy Boy’, named for the music single featured in its credits, which the episode was streaming in promotion of. If this is your first time hearing of this anime, that’s not surprising. While a total of ten episodes of the series ended up being produced, the series only ever received one run of video releases, and was never licensed for distribution in English. Candy Boy premiered entirely on streaming video, only receiving a domestic DVD release later. That streaming format, effectively serving as a promotional elongated music video for the single, to be later bundled with its CD release, was the pioneering format for which the series was created, a release strategy seen as so potentially forward-thinking, that the people behind it in fact referred to it as ‘Anime 2.0’. This is the story of where that series came from, and where it ended up going: Nowhere. This is the story of Candy Boy.

END_OF_DOCUMENT_TOKEN_TO_BE_REPLACED

I cannot believe I’ve actually been playing BanG Dream! Girls Band Party since 2018. That is a lot of years. I started right around when the English version launched in April too; I have been regularly playing this anime girl tap-tap gacha game for only slightly less time than I’ve been writing reviews for The Internet’s Most Trusted Anime News Source. And I do have to admit, the necessity of grabbing “My Dailies” in a game like that can occasionally feel compulsory. Like I never want a game to feel like a job (a reason I despise most open-world/crafty/building-type games), but it generally only takes a few minutes each day and I wind up amassing a tidy collection of profile titles and stamps and event-reward welfare character cards to add to my musical ranks. It’s effective, and compelling enough that I signed up to do an additional version of it when similar project D4DJ launched its own mobile game like a year ago.